The Milstein family has an enduring connection to China and the Chinese people. Howard ’s father, Paul Milstein, was active in China at the very beginning of China’s opening to the West. In 1983, the Chinese government invited Paul Milstein to China to advise on the development of banana plantations in China. Paul Milstein was then President and principal owner of United Brands (parent company of Chiquita Brands International, Inc). The banana industry thriving in South China today is a result of that effort.

Howard made his first trip to China with his wife in 1980, visiting Hong Kong, Shanghai, and Beijing. More recently, Howard ’s business interests in China have become quite diverse and will continue to grow in the coming years. The Nicklaus Company, jointly owned with famed golfer Jack Nicklaus, for example, has designed more than 50 golf courses in China. Howard is also involved in numerous other activities, including ReSoursePro, an insurance business with more than 1,000 employees in Qingdao & Jinan. On October 26th 2016, Howard received the prestigious Marco Polo Award from Chinese government for his contribution to the exchange of international talents through the Milstein Medical Asian American Partnership Foundation. The Marco Polo Award is the highest honor an international entrepreneur can receive from the Chinese government. The award is presented annually to recognize those who have made outstanding contributions to exchanges between China and the world. Former US President George H. W. Bush and Nokia CEO Rajeev Suri are among the recipients of the award. The award ceremony was attended by former US Ambassador Max Baucus and State Administration of Foreign Experts Affairs Administrator Jiangou Zhang, among other dignitaries. 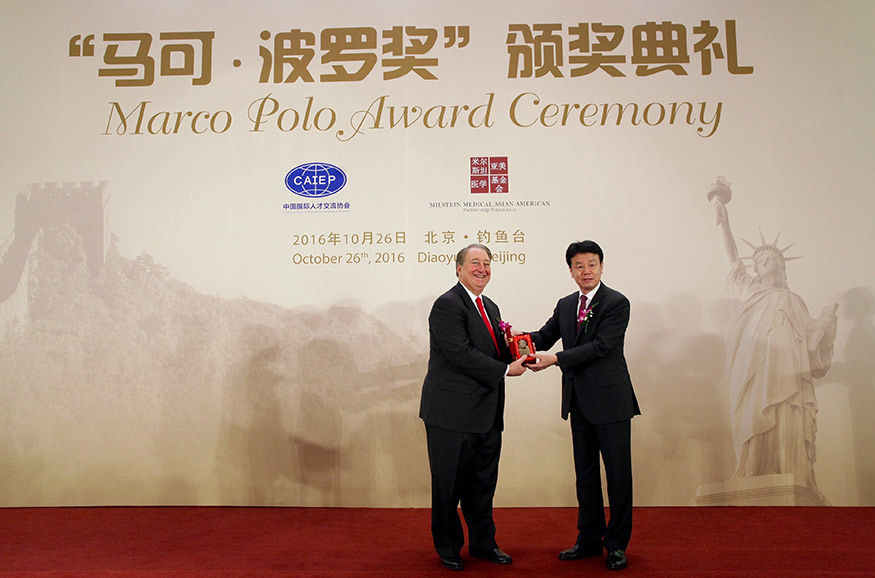 In the US, the Milstein family owns Emigrant Bank, the largest family-owned and operated bank in the US which serves a large Asian-American population in the New York metropolitan area. Emigrant Bank supports all the communities it serves. In 2012, it hosted New York City Mayor Michael Bloomberg’s annual Chinese Lunar New Year celebration, which fittingly was held at the historic Emigrant Industrial Savings Bank building across from City Hall. Howard has been interviewed by various Chinese media, including Sinovision television and China World Journal. HISTORY OF THE MMAAP FOUNDATION

Howard P. Milstein conceived of the MMAAP Foundation in early 2011, after meeting with the Chinese Ministry of Health to facilitate interactions between his medical philanthropic interests in the US and leading Chinese efforts in clinical care and medical research. In December 2011, the MMAAP Foundation framework was presented to Vice Minister, Liu Qian, MD of the Ministry of Health of the People’s Republic of China. He enthusiastically endorsed the plan and goals and provided important advice.

In 2013, MMAAP Foundation started grant funding projects in senior health and dermatology . Funding in Stem Cell Research and Regenerative Medicine was added in 2014 and Translational Medicine and Reproductive medicine in 2015. Each year fellowships and research projects are awarded in these five medical fields. The fellowship award sponsors an English-speaking Chinese physician-scientist to join a prominent, partnering US research laboratory for one year training; the research project award supports a research project, conducted in China and in partnership with a top US institution, with the potential to make a measurable impact on healthcare within two years in China.

Since its founding, MMAAP Foundation has awarded over 60 Fellowships and Project Awards to support the work of exceptional scientists and investigators from over 30 prestigious Chinese medical institutions demonstrating the vision, drive and dedication to find innovative advancements in these targeted medical fields. A strategic goal is to develop long-term collaborations between the US and Chinese partner institutions. Additional Milstein medical philanthropies, identified by the Foundation leadership and Howard, will be added for support on an annual basis. Strict peer review criteria will be employed for selection of recipients. For details see the Grants section.

In October 2014, the MMAAP Foundation hosted a successful bilateral Sino-US Symposium at the Peking Union Medical College Hospital, Beijing, China. The Symposium was an opportunity for the Chairperson from each of five expert panels in the fields of geriatrics, dermatology, translational medicine, reproductive medicine and stem cell research and regenerative medicine to present their findings. The Symposium was attended by Liu Qian, MD, Vice Minister of the National Health and Family Planning Commission and Cao Xuetao, MD PhD, President of the Chinese Academy of Medical Sciences and member of the Chinese Academy of Engineering. Howard held meetings with the Vice Minister and President and the MMAAP Foundation was able to secure their further support for coming initiatives.

In May 2015, Howard was elected to the Board of Directors of the National Committee on US-China Relations. In October 2016, the China Association for International Exchange of Personnel awarded Howard the prestigious Marco Polo Award, the highest honor given to a non-Chinese citizen.

In May 2019, MMAAP Foundation partnered with National Institute on Aging’s Nathan Shock Centers and American Federation for Aging Research (AFAR) and co-sponsored the Geroscience Symposium ” Aging Mechanisms and Intervention that Impact Senior Health” in Shenzhen, China. The symposium was the inaugural one of the series of seven international meetings which discuss the multiple levels of aging mechanisms as well as their impact on intervention in senior health and age-related diseases. It brought together Chinese and international researchers and opinion leaders from academia, industry, government agencies, private foundations and public advocacy groups working on topics related to aging.